Soccer is a pastime enjoyed by large part of the English population. During the World Cup, there is the opportunity for friendship among fans and sense of appreciation and unity overall, whether gathered at the game or just watching it on a big screen down at the local pub. 2010 FIFA World CUP is held in South Africa. My neighbors are from South Africa? LOVE the kids, they always spend time to play with me. They have a dog, named Honey, I do enjoy chasing her and partake in her barking songs. Check out my neighbor’s’ soccer ball.
It’s pink, purple and blue … very lady like soccer ball. COOL! 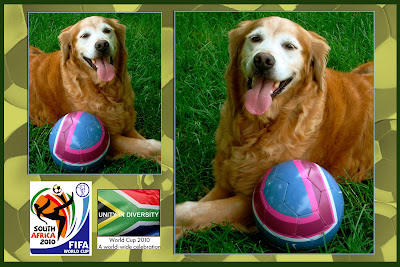 A lot of British people often wonder why Americans refer to the English version FOOTBALL as SOCCER. To uncover this question, a little bit of England’s history naming games need to be considered. The word “soccer” actually comes from England. In England, there were 2 types of football games” 1)Rugby Football and 2)Association Football. The slang tern for Rugby Football was “rugger.” The slang term for Association Football was “assoc.” The word “assoc” gradually changed to “soccer.” I don’t blame them. It is appropriate and easier to say. Well when Association Football was introduced in America, the game “football” already exist. To avoid any confusion, the Americans decided to use the word “soccer” for this new sport. According to English language dictionaries, Soccer is a short or an acronym for association football.
The word “soccer” was first used by the English.
MaxMom at Living Life To The MAX is hosting a special celebration in Honor of 2010 World CUP. It is called Unity Diversity. To read more, Click Here. It’s going to be FUN and can’t wait to read everyone’s post. It is definitely a wonderful way to celebrate South Africa – 2010 World CUP.
Lots of Golden Woofs,