Hope everyone had a wonderful Halloween weekend.
I participated in the Spooky Pooch Parade (as a vendor). I was not able to join the parade but had an opportunity to enjoy the scenery before the festivities started. There were about 400 dogs that participated.
The most popular costume was a bumble bee.
My favorite was the Budweiser Dog who won the best Senior dog.
Woof! Woof! Guess who came by … 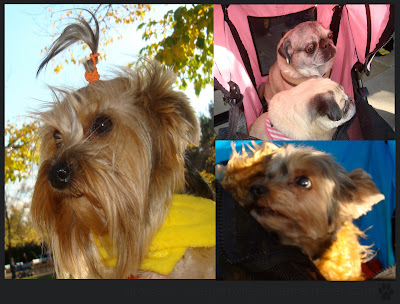 My bloggie freinds, Mr. Pip, Those Elgin Pugs, and Neeko.
It was fun and a Golden Pleasure seeing you.
Golden Thanks for participating. Hope to see you guys again.
I did my very Golden Best to watch the festivities but I got tired.
Lots of people took my photograph. Also, I was petted by lots of people, mostly by children wearing their cute costumes and some elderly.

I would like to share a touching moment …
A fragile elderly man walked in our booth. We thought he was overwhelmed from the event and just wanted to rest. It took him a while to be able to sit down on the chair next to me. When he finally sat down, he looked and petted me. He had the biggest smile and asked his daughter for a photo with me. He rested for a while as he continued to pet me. A Golden Moment that I’ll treasure.
Lots of Golden Woofs,