This year marks the 10th year of the September 11, 2001 events.
A lot has changed since the tragic events took place on 9/11.
Many moved on but no one has ever forgotten
the effects that 9/11 brought to their lives. 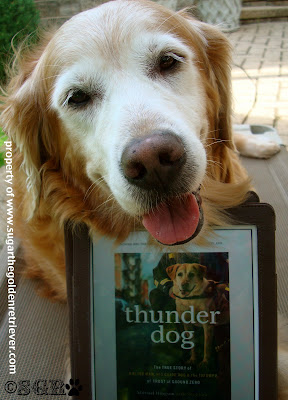 Thunder Dog is a true story about life of a blind man and his guide dog.
Roselle led his owner Michael out of the danger from the ruins of the World Trade Center on 9/11.
Michael’s journey down the stairs of the World Trade Center Tower interspersed throughout the book while he also reflects on his life, learning and coping as a blind man. Michael discussed the knowledge he acquired in his life and his special bond with his guide dog,
in which aided him and Roselle to escape the terror of 9/11.
Michael and his guide dog Roselle made their way down over 1000 steps. They made it outside just minutes before the first tower fell.
Trust, Courage, Strength and Heroism
A great book that you just don’t want to put down. Mom read it in a couple hours. It is a heartfelt and inspirational story. The story of Thunder Dog will move you … I give it 4 Golden PAWS: A MUST Read!
Here’s a video of Michael and Roselle
Heroism is a trait not limited to humans.
Lots of Golden Woofs