Marge Simpson is a fictional main character in the American animated sitcom The Simpsons. This is not the 1st time Marge Simpson’s head appeared on my blog. If you are a follower of my blog, you’ll remember my WW: I Got Marge Simpson’s Head. We received overwhelming comments and emails. Many of you asked, “where we got it”. Also, some of you predicted that Marge’s head will be torn up soon. 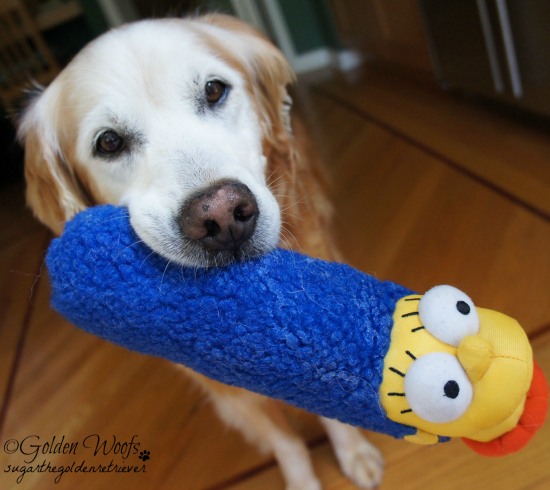 Marge Simpson’s head is my favorite “new” toy given by HartzPets when mom attended BlogPaws. My peeps have seen The Simpsons show. I do too … during channel surfing, when a Simpsons characters speaks my eyes get wide and my ears goes up. In 2014, the Simpsons show is celebrating its 25th year. WOW! In honor of their show HartzPets created dog/cat toys featuring the main Simpson’s characters, Homer, Marge, Bart, Lisa and Maggie.
I am Golden Fortunate and Happy to have previewed the Marge Simpson toy.
Lots of Golden Thanks HartzPets.

I Got Marge Simpson’s Head from Golden Woofs on Vimeo.

We are a bit curious why Marge Simpson’s head (hair) is blue so we did a google research …
“Marge’s distinctive blue beehive hairstyle was inspired by a combination of the Bride’s in a horror film Bride of Frankenstein and the style that Margaret Groening wore in the 1960s.”
My mom is a bit too young as she is not familiar with the movie and Ms. Groening.
We have to do an extended google research.

No Mischief with Marge Simpson’s Head but I’m joining this post to Monday Mischief blog hop.