Russell Madness is brought to you by Fox Home Entertainment and the makers of Air Bud movies (those adorable talking Golden Retrievers). This time the star of the movie is a talking Jack Russell dog as Russell and Hunk, a monkey. Russell Madness is both a heart-warming and funny movie. The movie is geared for the whole family and provides a pawsome positive message that “The Strongest Tag Team is Family”.

I had an opportunity to preview Russell Madness at the Fox Studios press screening. As an adult, the movie made smile and laugh. The movie starts when Russell is unable to find his forever home because he pees on anyone who thinks about adopting him. When Russell heard he is bound for the pound, he ran away and found his way to the Ferraro’s wrestling arena where he met Hunk, the monkey. Hunk is hilarious and loves bananas. We were told that at Cold Stone Creamery, you can get Hunk’s Banana Split Decision.

Love the scene where Hunk and the little girl Ferraro had tea. Hunk became Russell wresting coach, … just imagine a monkey coaching a dog to wrestle – BOL!!! Why did Russell become a wrestler? The Ferraro family is need of financial help to revitalize their grandfather’s wrestling arena. Hunk and Max (kid Ferraro) discover Russell’s wrestling skills, Russell became an instant star and wrestled different wrestlers. The wrestling scenes are funny especially with John Hennigan (AKA John Morrison former WWE). You have to watch Russell Madness to find out how he won the final match.

The Russell Madness DVD is now available for sale. You can also rent it at Redbox. At Walmart, or you can purchase a special Russell Madness set which includes the DVD and a Russell Madness Plush Toy. The DVD also includes special features that will definitely provide you and your kids extra smiles and laughters.

Would you like to own a copy of Russell Madness and Russell Plush toy. Follow the giveaway tool below to join.  We are giving away 5 Russell Madness DVDs + a Russell plush toys. You can also join my blog buddies Oz the Terrier, Pawsitively Pets, Irresisitable Pets and Barking from the Bayou who are helping us promote the movie. We invite you to also read their post.

Lots of Golden Thanks to Russell Madness for inviting us to the press screening and providing the giveaway prizes. 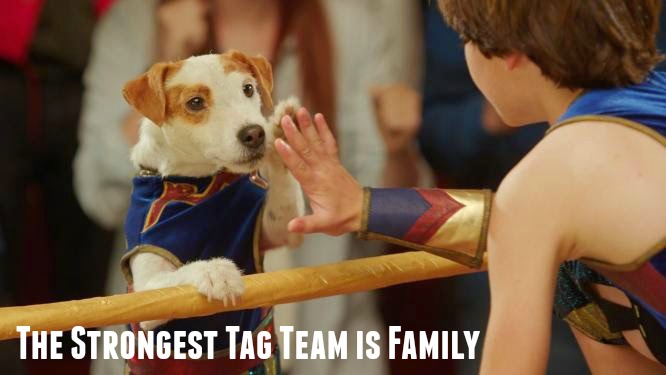