In a previous post, we shared some tricks: 10 Tips For Taking Fun Halloween Photos Of Your Dog. While Halloween’s Eve is a fun and festive time of year, similar to other holidays, it can pose some real-life threats to some of our pets. Like the Fourth of July, loud, unexplained noises, bright lights, and unfamiliar decorations can be especially frightening to some our four-legged friends.

But it depends on the dog. For example, Sugar loves all the extra attention and praise while in costume, but it can also be confusing for those who stay at home and face a constant barrage of knocking on the door and a doorbell ringing every five minutes. Similar to keeping your children safe during this yearly ritual, it’s also important to keep our pets out of harm’s way as well. Our pal Amber Kingsley, dog Pomeranian mom and dog enthusiast, shared some Real-Life Halloween Frights and how to keep your pets out of Halloween Dangers. 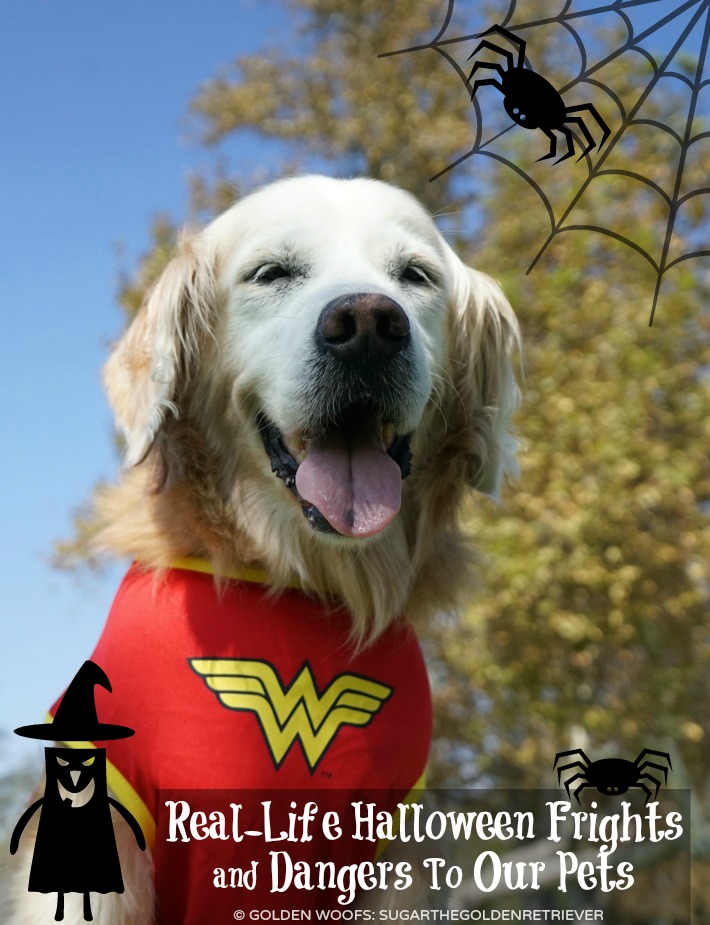 Real-Life Halloween Frights and Dangers To Our Pets

When The Undead is REALLY Dead

For anyone who has watched a crime drama on television during the month of October, you’ll often find a plot twist involving a drama scenario where a character is actually dead, but people think it’s just a prank. Although it may be a rare occurrence, what if your dog were to encounter an actual decaying corpse of a wild animal and not a part of a seasonal zombie apocalypse display?

Dogs are naturally attracted to garbage and the smell of decay, so be sure they don’t encounter the real thing, even though the odds are rare. Contact with an actual dead animal like a raccoon can cause serious health risks and other potential problems for our pets. Be especially aware if your dog pays too much attention to a Halloween decoration that should smell like ordinary, plain plastic and not something that has recently passed away.

If your dog is going out and about on All Hallow’s Eve, make sure they’re properly equipped. Just like a human child, they should be wearing something reflective, bright colors and are supervised at all times. Keep them leashed and close to you at all times and make sure they aren’t offered sweets and treats by children who don’t know any better.

For older dogs or those who simply aren’t particularly social or could be frighted by all of this activity, indoors is the safest place for them, especially after dark. Be sure to stay beside them and comfort them during this difficult time. If your dog is particularly stressed out by this type of environment, consider a natural soothing agent, like Rescue Remedy to keep them calm without the use of sedatives or other drugs.

Watch Out For Unsweetened Treats

We all know better than to give a dog chocolate, but similar to the dangers of Cocoa, Xylitol, a sugar substitute found in some candy, gum, baked goods, toothpaste, even certain brands of peanut butter, all of them can be particularly problematic for pets.

In even smaller amounts than chocolate, according to some sources, an average of ten dogs are being sickened or killed every day by the toxicity that’s associated with the consumption of Xylitol. Be aware of these products, even their wrappers, should be kept away from pets.

Don’t be too overly frightened about Halloween with your pets. With caution, being prepared and aware can ensure they’re safe during the holidays.