Golden Retrievers are one of the most popular dog breeds in America: they’re intelligent, loyal, and friendly making them an appealing family pet! When we think of Golden Retrievers, what might come to mind are popular movies such as Air Bud or Homeward Bound. The main character is friendly, charismatic, and loyal enough to not give up until making it back home to his family. This begs the question, is the Golden Retriever breed really this loyal and friendly? This answer is a resounding yes!

Personally, from my own experience, they are! Due to their patience and kind demeanor, they make great pets for families with children, seniors, or people living on their own because they’re gentle around kids and strangers. Golden retrievers are also trustworthy, loving, and intelligent, so they will always be a great companion for families with infants and toddlers.

In fact, the American Kennel Club has solidified the Golden Retriever as one of the top 5 most popular dog breeds for over seven years.

This is due to the breed’s fantastic temperament. Golden Retrievers have long been praised as the most loyal and friendly breed; this makes them a perfect candidate for families. Whether you have other pets, children, or have new friends over, the Golden Retriever breed is always friendly and responsive to others. Originally bred to hunt waterfowl, the Golden Retriever loves to play outdoors and can keep up with the most exuberant children.

Golden Retriever breed maintains its youthful charisma throughout its entire life, always in the mood to play and please its owners.

All breed members maintain this same temperament, as that is the primary key in its popularity. Aggression is very rare in Golden Retrievers, making them the number one choice for a family dog. 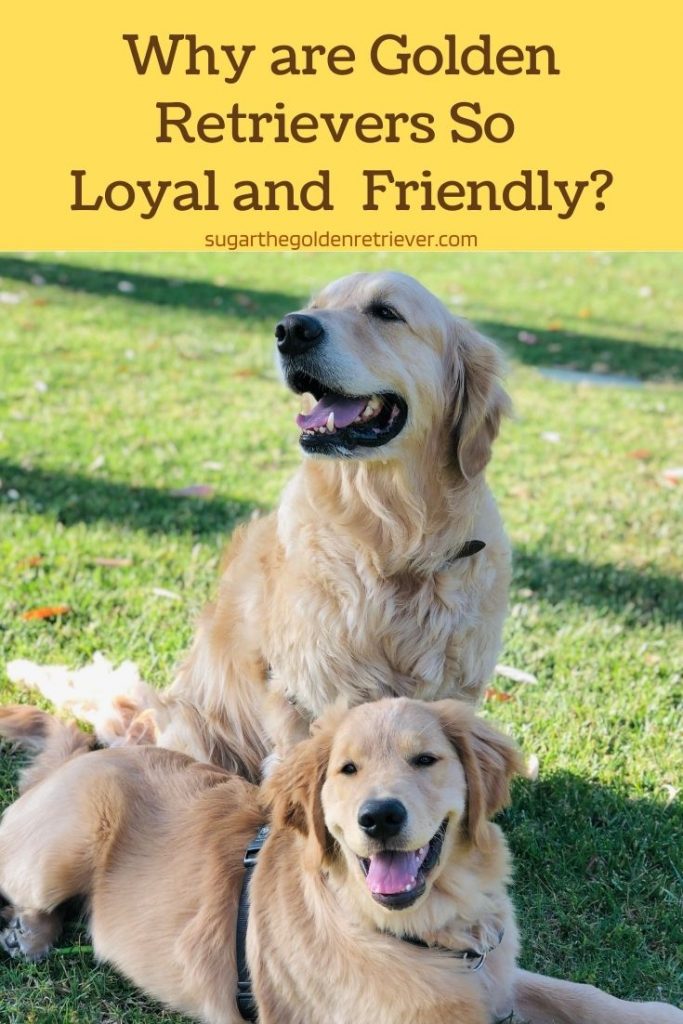 What Makes Golden Retrievers so Amazingly Loyal and Friendly?

Golden Retrievers have many wonderful qualities, but the most outstanding seems to be their loyalty and friendliness. The breed is known as one of the most hardworking because they were bred to work closely with hunters.

The qualities bred into Goldens make them extraordinarily patient and intelligent, as they were intended to be a hunter’s right hand. These qualities make them very patient with children and very receptive to obedience and skill training. The Golden Retriever breed is one of the most intelligent dog breeds and is very easy to train. This makes it effortless to create strong bonds between the dog, owner, and family.

Golden Retrievers are natural people-pleasers and will do anything to make sure their owners are happy and proud of them. If Lassie had been a Golden, then Timmy never would have gotten stuck in that well, that’s for sure! They are very much selfless dogs and, even in the face of danger, will go out of the way to protect their owners. The fun thing about the Golden Retriever breed is that you can train them to do almost anything! Because they do enjoy pleasing people so much, they tend to make excellent service dogs.

The Golden Retriever is one of the most friendly, loyal, and energetic dog breeds. These characteristics make them very charismatic and enjoyable to be around, and the more you are around a golden the stronger their bond becomes with you. They love to give and get attention and prefer active, excitable people to match their own energetic personalities. The more you and your Golden Retriever spend time playing and enjoying each other’s company, the stronger the bond becomes between you two, and their loyalty will grow. Once you have given your love to this dog breed, you can be sure to experience the true power of an unbreakable bond.

Golden Retrievers are designated to the Sporting Group of dog breeds, which means they love an active lifestyle. It is essential to keep in mind their energy level when deciding to adopt a golden. For instance, they wouldn’t make very good apartment dogs, and if you’re not a fan of walking, they aren’t the right breed for you.

Their water sporting and hunting past gives the breed unlimited energy and a love for playing outdoors and anywhere near water. They love to play fetch and will play for hours upon hours, which is perfect for families with energetic and adventurous children with large yards. The breed is not shy around new people and will welcome playtime with any companion who will join, human and animal alike. 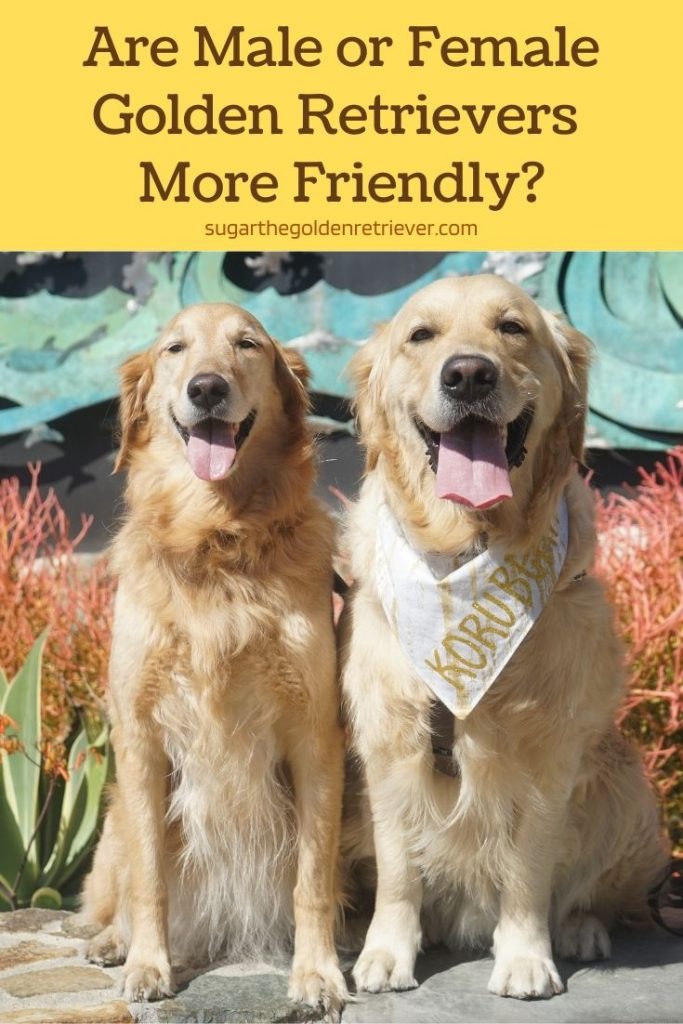 Golden Retrievers, as a whole, are a very friendly breed, but is there a noticeable difference between male and female Goldens? The answer is, sometimes, yes!

While a dog’s personality is determined by many factors such as parentage and owner temperament, a dog’s sex may also play a role. Many owners and trainers agree that male Golden Retrievers are considered more attention-seeking when it comes to their owners.

This means that a male golden will be more likely to pine for your attention and constantly seek affection and love from their owners. Female Goldens are just as loving, intelligent, and loyal as males, but they seem to display less of a need to broadcast and whine for that type of attention.

Female Golden Retrievers will show their love to you and accept any love you give them in their own time but won’t be as likely to beg for attention as their male counterparts.

Male and female Golden Retrievers contain a few other differences as well, which you can learn about here. 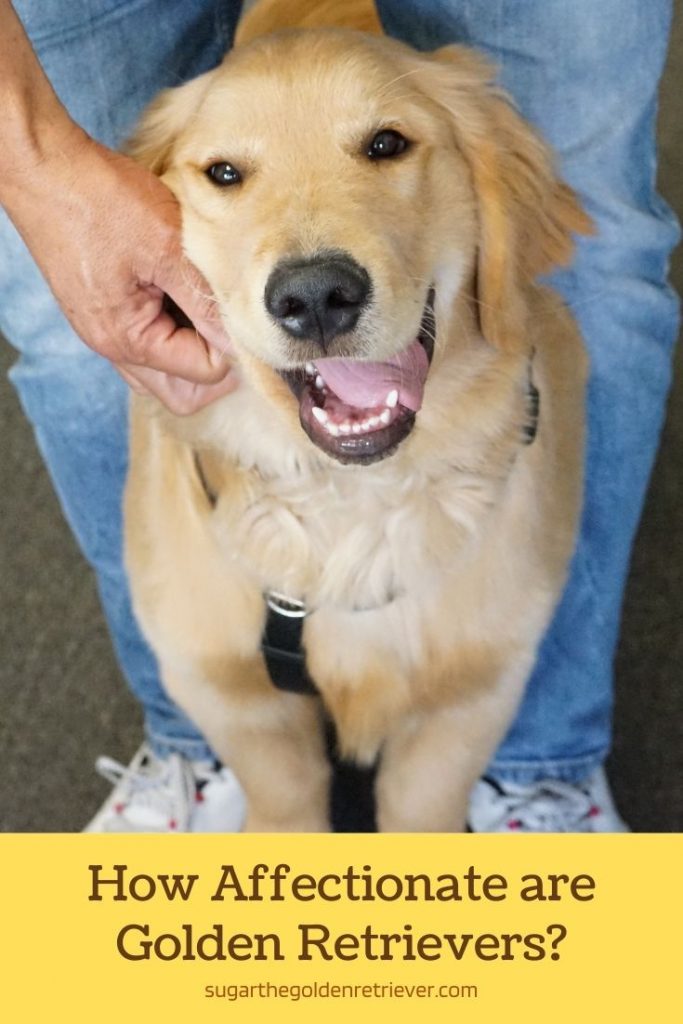 How Affectionate are Golden Retrievers?

Golden Retrievers are one of the most affectionate dog breeds. They quite often forget their size and prefer to think of themselves as lap dogs!. While each dog will have their own personality, most in this breed are cuddlers and will love to snuggle up to their owners and their children. It is vital to make sure you have enough time and the ability to give these dogs the attention they need to live a happy life. While having an affectionate dog is a plus for most dog owners, if you’re unable to return that affection, it can lower a Golden’s quality of life.

Do Golden Retrievers have a favorite person?

So, we know Golden Retrievers love their owners and families, but do they have a favorite person? That answer is relative to how much time is spent between the dog and other individuals. Some Goldens may have a favorite person if one specific individual spends more time with the dog. Overall, though, the Golden Retriever is a breed that likes to spread its love around and will love everyone who spends time with them.

Are Golden Retrievers Good with Cats?

Golden Retrievers are a breed of even temperament and friendliness, so they are a great dog to introduce to other animals, even cats! Goldens are one of the top breeds of dogs that get along well with cats.
As long as the dog and cat are properly introduced or have been raised together from a young age, there will be no issues between the two. Goldens are not generally territorial with others and can be introduced to a cat companion at any time. Once they are used to one another, your golden will accept the cat as part of the family.

Are Golden Retrievers Friendly with other Dog Breeds?

Absolutely! Due to the social nature of the breed, they make great companions to other dogs. The only thing to consider in this case is, does the other dog breed make a good companion? Goldens get along the best with dog breeds that are similar in nature to themselves such as, other Goldens, Poodles, Pugs, Beagles, or Collies. Because they are such high-energy dogs and will want to play, it is best to match them with another breed with some of the same characteristics.

Are Golden Retrievers Friendly with Strangers?

If you have a friend over and your golden has never met them, you might be asking yourself, will they react well? Golden Retrievers are always open to making new friends, and they will rarely react aggressively towards strangers. This means if your house guest is as ready to play as your golden, then they will get along great. If your golden is apprehensive to a stranger at first, it may just take a treat and a belly rub to make them friends.

Are Golden Retrievers Good With Kids?

The Golden Retrievers’ energetic, friendly, and loyal nature makes them the perfect companion for kids of all ages. They are patient and empathetic dogs and will generally not play too rough with children. Like with any dog breed, you must watch them with young children, but overall, they are among the best breeds for families. They love to be outside running and playing fetch and enjoy cuddling with their families.

Can Golden Retrievers be Aggressive Towards People?

Goldens are prided as one of the friendliest, most even-tempered dog breeds, so aggression in them is very rare. This dog breed is the safest to have around children and new people. It is also an excellent pick for service dogs, as they are very patient and intelligent and can understand their humans’ emotions. This means they would also be a good dog for disabled or special needs children. If a golden exhibits signs of aggression, it is most likely due to past trauma or mistreatment. Like with any dog that displays aggression, getting them the proper training and assistance is crucial to curb the behavior.

Are Golden Retrievers Safe Around Babies?

Golden Retrievers are dubbed the best family dog. This extends to the babies of the family. Like all dogs, the golden should be introduced to the baby slowly, but the more interactions they have, the stronger their bond will become.

Since Goldens are such a patient, friendly, and empathetic breed, they will generally recognize the baby as someone to be gentle with and protective of. With that being said, it is still crucial to allow the dog and the baby to interact and monitor how your dog will react.

As they are also great cuddlers, many will love to sleep beside the baby once they have bonded and allowed the child to snuggle up to them. 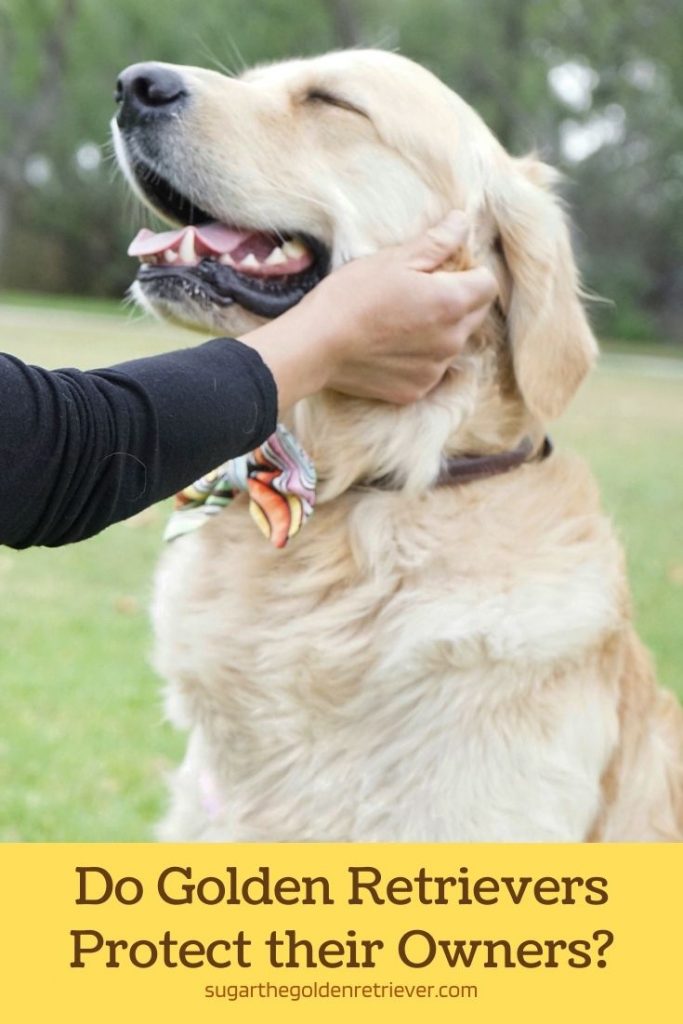 Do Golden Retrievers Protect their Owners?

Goldens have a track record of having a calm yet playful demeanor, so they usually do not qualify as the best guard dog. However, their loyalty is nearly unmatched, so in certain situations, or if something is causing the dog or owner anxiety, the dog will react accordingly.

While guarding against intruders may not be their strong suit, Goldens are famously known for their intelligence and heroics. They will protect you from other animals they view as a threat, have a very intimidating bark, and are relatively large, which will likely ward off others who may mean you harm.

So… Are Golden Retrievers the friendliest dogs?

From my experience and as a golden retriever’s dog parent, absolutely! The Golden Retriever has proven time and time again that it is the friendliest and most loyal dog. Whether you want to play all day outside, have a snuggle at bedtime, or need an intelligent dog who will warn you of danger and work as hard as you do, the Golden Retriever ticks all of the boxes of man’s best friend!