In this post, I’m going to share the history, breed characteristics, appearance, temperament, and more to give you clear-cut insights about these two breeds of dogs.

Let’s dig into by starting with the origin of these wonderful breeds. 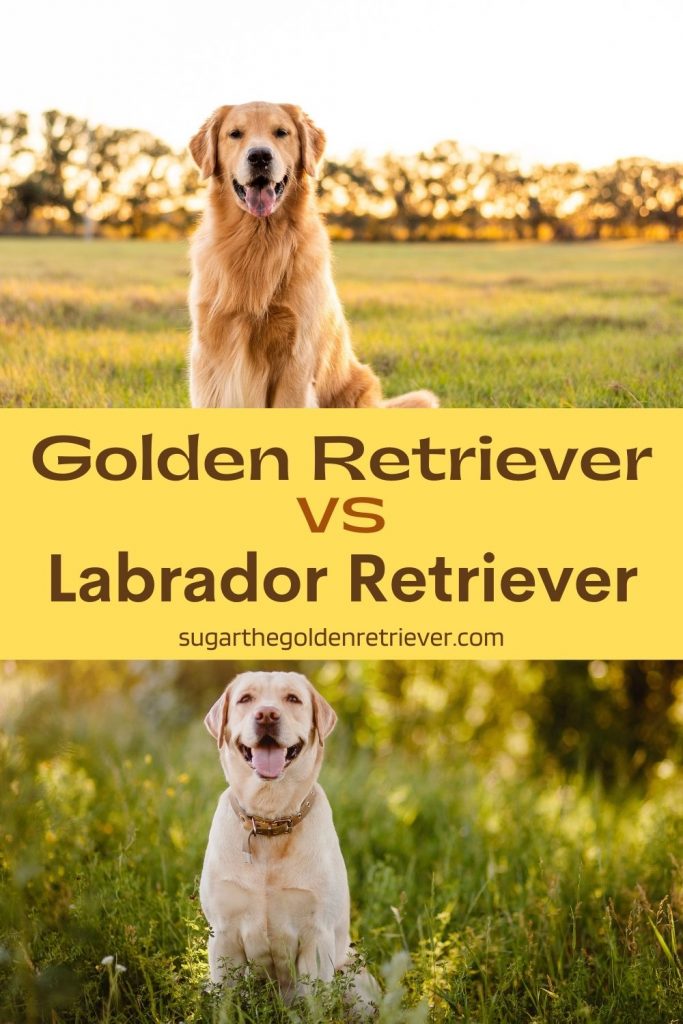 Both of these dog breeds are world-renowned now but they didn’t start out that way!

History of the Golden Retriever

The Golden Retriever originated in Scotland as the ideal gun dog for the Baron of Tweedmouth, Dudley Majoribanks. As weapons and hunting improved in the 19th century, hunters needed more sophisticated gun dogs to retrieve downed birds. Thus, the Golden was bred into existence, and it was bred to have stamina, power, intelligence, and a gentle mouth for retrieving birds without destroying them. The Golden Retrievers were also bred with waterdogs so that it could have water-resistant coats and transition from retrieving small game in water and on land, in the marshes of Scotland.

History of  the Labrador Retriever

The Labrador was bred for similar reasons to the Golden Retriever, but more focused on waterfowl hunting. This sporting breed came about when owners in Britain wanted to improve upon the now extinct St. John’s Water-Dog. The St. John’s Water Dog was an excellent fishing dog for icy Canadian waters, pulling in fishing nets for their owners. When British duck hunters saw the love for water found in these breeds, they wanted to improve upon it and make them exceptional waterfowl retrievers. Thus, the Labrador Retriever was born. 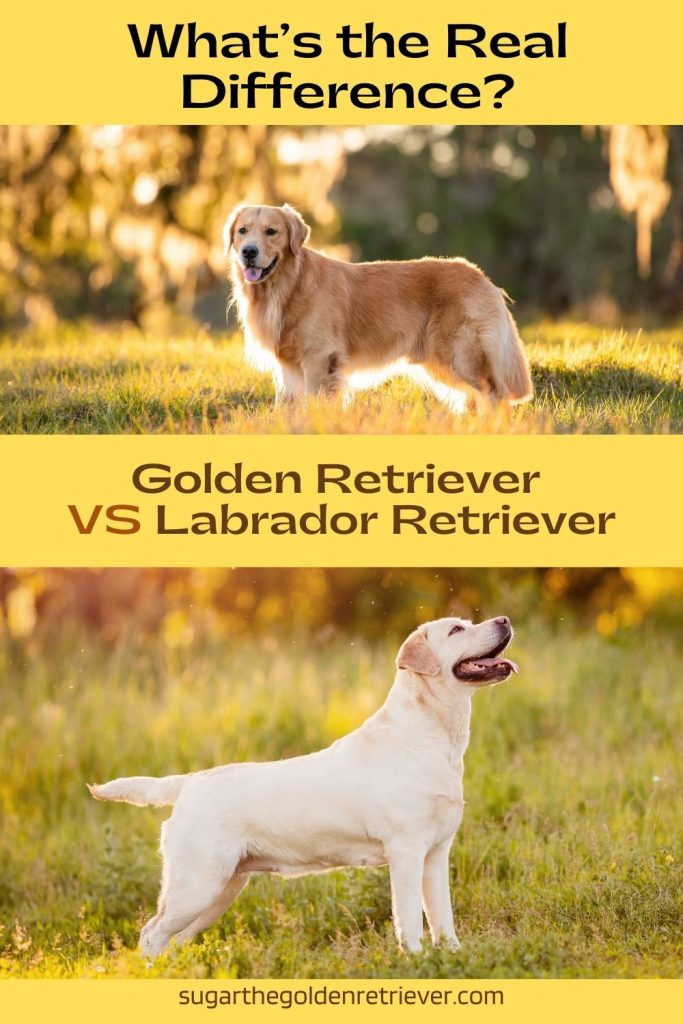 The Labrador Retriever breed has a muscular, stouter build, with a wider snout. The AKC states the average weight for Labs is 65 to 80 pounds in males, and 55 to 75 pounds in females. Their average height is 22 to 25 inches for males and 22 to 24 inches for females.

The breeds are very similar in height and weight, but the Lab does weigh an average of 5 pounds more than the Golden.

Golden Retrievers have a lot of energy, require an active lifestyle, family-oriented, and intelligent dogs. They do not make great watchdogs as they are very friendly dogs and love to make new friends. They have quite high energy levels and are fairly playful. These dogs love the outdoors but also love to cuddle and be lapdogs at the end of the day.

Labrador Retrievers, like Golden Retriever, love children and other animals. They are a good choice for a family dog. They enjoy everyone and are open to strangers, making them not the best watchdog. They are high-energy dogs and love water as they were bred for water terrain and swimming. The Labrador Retrievers are more playful and slightly more energetic than the Golden Retriever. However, both retriever breeds have similar temperaments.

These two breeds were bred for similar purposes, but have variations in their coat structures, based on the environments in which they originated. These variations are easy to see and cause quite a difference during shedding season. Both breeds need regular brushing (especially the Golden Retriever) and extensively brushed during shedding seasons.

The Golden Retriever has a double coat consisting of an inner and outer coat. The outer coat is the long wavy, feathering that adds eloquence to the breed during dog shows. Due to their longer outer coat, they require extra grooming this isn’t needed for Labs. Their fur can become matted in their inner coats, or from playing outside in grasses.

They will have to be brushed with an inner coat rake to make sure all parts of the coat are brushed. The longer coat also means they will need trimming that would not be necessary for Labs. The Golden Retriever’s coat are water repellant as compared to the completely water-resistant coat of the Lab.

The Labrador Retriever also has a double coat, consisting of an inner and outer layer. The Lab has a much denser coat than the Golden, and it does not typically grow as long. This means they are a bit easier to take care of than the Golden’s coat, but they will still need to be extensively brushed during shedding season.

Their coat is water-resistant as well, so it is important to make sure that during baths, you are getting both layers of the coat lathered and rinsed well. After baths, it is very important to make sure to dry them thoroughly, as they are not used to having water penetrate their inner coats, and it can make them shiver due to the cold.

Golden Retrievers have an average lifespan of 10 to 12 years. The most common health problems Golden Retriever owners can expect are hip and elbow dysplasia, which increases the risk of arthritis in joints, progressive retinal atrophy or loss of vision, and exercise-induced collapse.

Labrador Retrievers have an average lifespan of 10 to 12 years and share many of the same predispositions, such as retinal atrophy, hip dysplasia, and exercise-induced collapse. While obesity can be an issue with both breeds, it is more of a risk in Labs, which means a consistent and healthy diet is of the utmost importance, or the increased weight increases the risk of hip dysplasia and arthritis. Another issue is a condition in which the eyelid has a malformation and rolls in to cause irritation, and laryngeal paralysis, which is a condition that affects older Labs and partially paralyzes their voice box and hinders breathing.

While not a common health issues among dogs, exercise-induced collapse is present in both Golden Retrievers and Labradors and comes after periods of very extensive exercise. This condition, when it is mild, could result in loss of muscle control and dragging of limbs for up to 30 minutes, but in rarer and more severe cases could result in sudden death.

Golden Retrievers are active breeds and want constant attention and play. These dogs will need at least 30 minutes to an hour of exercise daily to prevent them from becoming restless or reckless.

Having slightly higher energy and levels of playfulness, Labrador Retrievers will require much more attention and have a higher risk of separation anxiety which will cause them to act out. They also need about an hour of exercise a day to keep them calm and satisfied.

Training A Golden Retriever vs A Labrador Retriever

The Golden Retriever breed is highly intelligent and excels in obedience training. A working dog who is a born people pleaser, they are consistently looking for ways to make you happy. Golden Retriever dogs make great therapy dogs and service dogs because of their ability to retain training commands.

Identical to the Golden Retriever, the Lab is very intelligent and loves to please their owner. Labrador Retriever makes great therapy dogs, service dogs and guide dogs, due to their great temperament with people and their ability to follow commands. 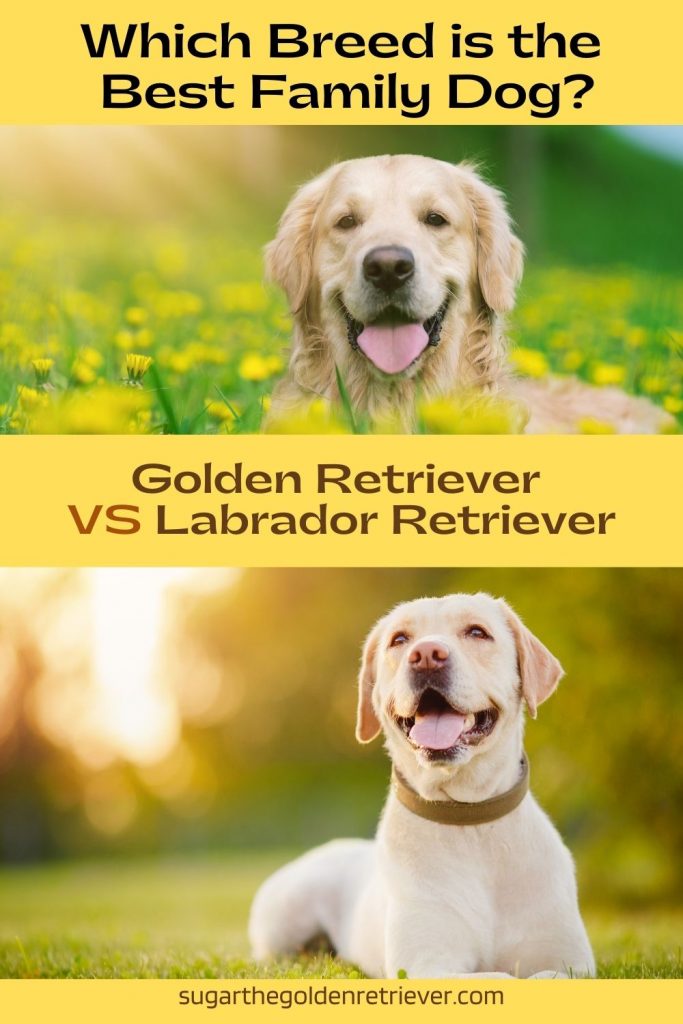 Golden Retriever vs Labrador Retriever – Which breed is the best family dog?

The Golden Retriever and the Lab are both very open and loving dogs; while the Golden may be faintly calmer than the Lab, it is still energetic and playful. They will open to other animals and people whenever they meet them.

The Lab and Golden have been battling for the title of the best family dog for quite some time, but I believe it is safe to call it a tie. Both breeds have the same amount of loving, playful energy, and would give anything to please their owners. The only difference may be the marginally higher level of play and attention needed for the Lab.

Golden Retriever vs Labrador Retriever – Who is the Better Guard Dog?

Being so open to new people and animals, the Golden will not be a great guard dog, as they tend to view new faces as potential friends and not a threat.

Labs are also in the same boat as the Golden, because they love to meet new people, and they have no problems letting people in and asking them for their attention.

Which Is The Right Breed Of Dog For Your Family? Golden Retriever Or Labrador Retriever

There are a few things to consider when choosing the right dog for your family. Both Golden Retrievers and Labrador Retrievers are great choices for families, but there are some differences between these two breeds that you should take into account. Both are relatively easy to train and are very intelligent, so either one would make a great addition to your family. Ultimately, the best breed of dog for your family will depend on your individual needs and preferences.