Are you a golden retriever parent and wondering why is your golden dog making these noises? The familiar grunts, groans, and moans your Golden Retriever lets out can mean several different things, and in this article, I’ll be sharing some explanations for these sounds.

Is it normal for dogs in general to groan?

You may ask yourself is it normal for all dogs to groan or is my dog just extremely vocal? It is quite normal for dogs to groan, much like people, they can express their emotions through sounds and grunts. What is most important to recognize with your dog, though, is the context in which they are groaning. Groans can be normal expressions of happiness, fatigue, or boredom. However, there are also times in which a dog moans or groans in pain. So, it is important to watch your dog to see if you notice any consistent grunts when they are performing regular activities, such as laying down, standing up, or when going on walks. 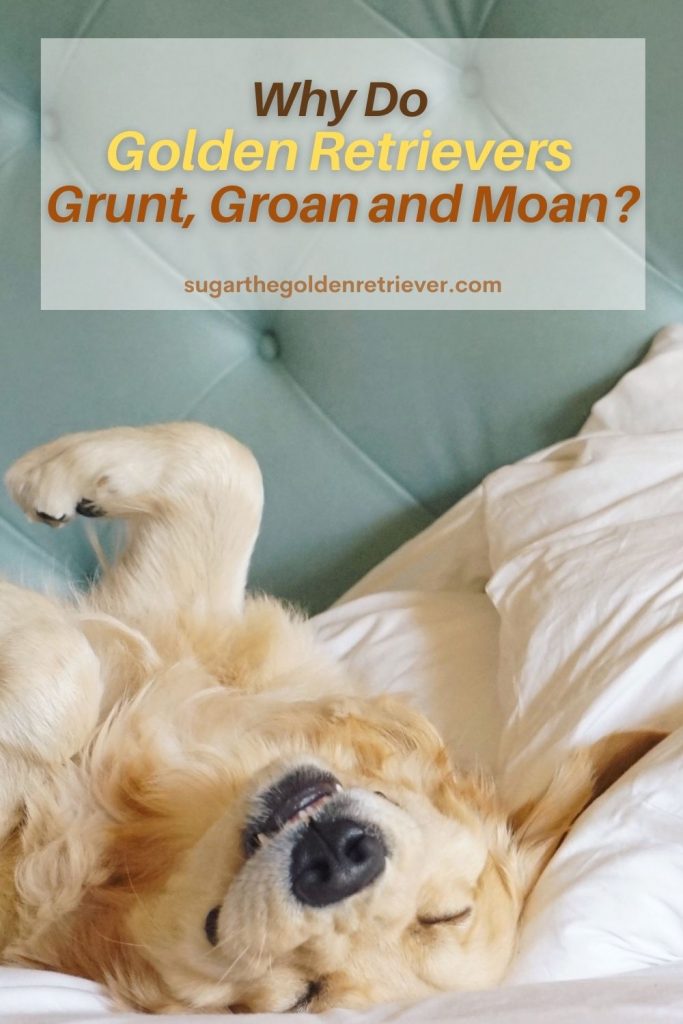 What does it mean when a golden retriever groans and moans?

For a Golden Retriever, as with other dog breeds, groans and moans are vocalizations of communication that can convey many different emotions or signals.

When we adopted KORU BEAR, he groans a lot. Observing and being a proactive dog parent helped a lot in understanding why he groans. Mostly, for good reasons he groans when we or someone pets. Other times, he groans for other reasons.

Your Golden May Be Alerting You to Illness or Injury

If your golden is not usually an avid groaner and has started groaning and grunting a lot suddenly, it could be a sign of an injury. Remain vigilant with your dog and pay attention to any other new behaviors such as limping, vomiting, or whining when you touch them. Many things could cause these vocalizations when it comes to injury, most commonly are insect stings or other injuries to the paw pads or a bite from another animal.

If your dog grunts and moans at certain times when they normally wouldn’t it could also be a sign of an illness such as arthritis. If your golden is older and they have started to make these noises when they are laying down, standing up, or even if they try to play but then seem to give up, these could be signs of arthritis in your pet.

Joint pain and inflammation happens in humans when we get older, but it also occurs in dogs. Other illnesses which cause these vocalizations could be ascites or panosteitis.

Panosteitis, is a condition which can be attributed to growing pains in the legs of large dog breeds, usually of puppy age. While this condition may occur in older dogs, it mainly affects those 5 to 18 months old. In any case, it is best to take your dog to the vet if you notice these new and out of the ordinary behaviors.

Ascites is a condition of fluid buildup in a dog’s abdomen that can affect puppies or older dogs who have liver or bladder damage, cancer, or other severe abdominal issues.

Trying to Warn You of Something

Groans and grunts may also be a signal of warning from your golden retriever, they may be feeling that their territory boundary is being violated and groan to warn you that this is their space and they want it to themselves. These communications of territorial behaviors are less likely to occur with an even-tempered breed like the Golden Retriever but it is always best to assess your dog’s body language and how they are feeling in these situations.
These noises, if accompanied by behavior like showing their teeth or hair standing up on their backs, means to back off. They can also grunt to warn you of something you may not see, such as a snake in the grass while you are out on a walk. Your golden retriever may groan and grunt to let you know something is not right, or there is something dangerous here.

Along the lines of territorial behaviors, these sounds can be because your dog is protecting something that they claim as theirs, such as food or toys. They may grunt because they do not want these things bothered, and want to let others around them know, “Woofs, this is mine, don’t touch it”.

As stated before, this is less of an issue with a lovable, sharing breed like the golden retriever, but body language is always key in these situations because even a sweet golden might get territorial around its food bowl. Respect your dog’s boundaries in the moment and if the issue persists, golden retrievers are great at obedience training, so this behavior can be fixed with proper training.

Anxiety is very common among humans and the same can be said for dogs as well. A dog may exhibit signs of fear or anxiety by moaning and grunting, similar to a whine, this behavior can be because of many anxious situations. Pay attention to what is around that could be causing stress for your golden such as new people or pets, car rides, a visit to the vet, or even you getting ready to leave this house without them. A golden retriever can be a very clingy and codependent breed, so this behavior could be a sign of separation anxiety.

Your Golden Retriever May Be Bored and Just Looking for Attention

As one of the more energetic and needy breeds, the golden retriever requires anywhere from 30 minutes to 1 hour of exercise each day. If your golden is not getting this adequate amount of exercise, then they cannot expel all of their pent-up energy and may let out these noises because they are trying to let you know they want to go play.

This breed is quite needy and loves affection, so you may also hear these noises when you are busy with something or seem to be ignoring them, this is their way of getting your attention so you know to pet them and play with them. 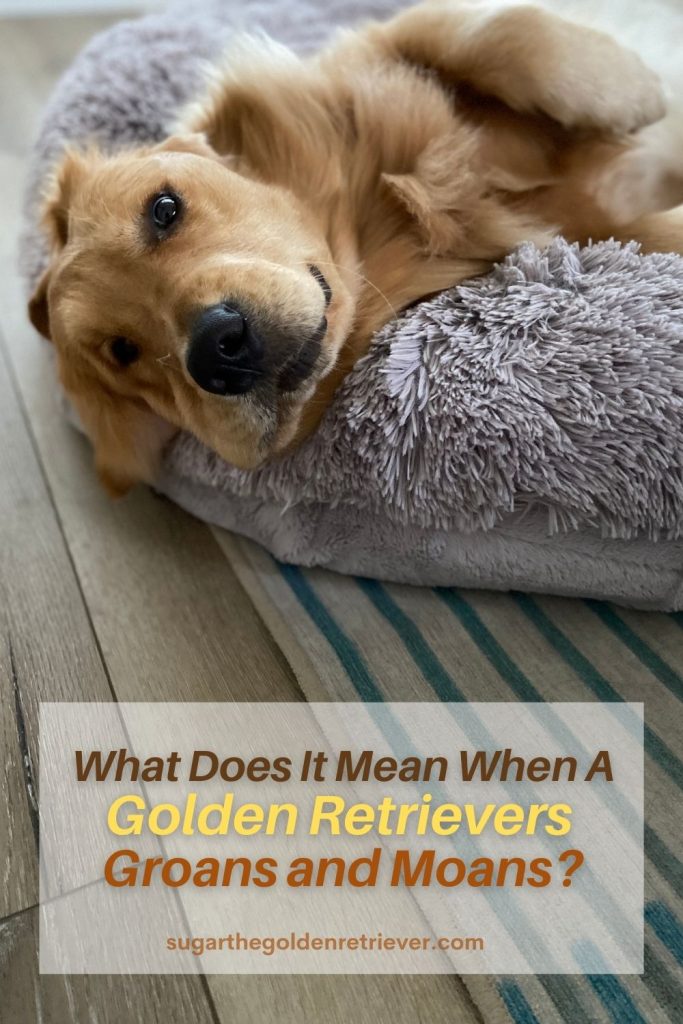 Why Do Goldens Groan When They Lie Down?

Goldens may groan when they lie down for a few reasons, one being that they have had a long day playing and they are happy to lay down and relax, or because they are sleepy. Another reason, which may cause concern if associated with other symptoms, is an illness.

Inflammation of the bones/joints, or fluid buildup in their abdomen may cause your golden to grunt in discomfort when they are getting up or laying down. Most times, your dog is making noises of contentment when lying down, but if there are other behaviors present that may tell you they are sick, these noises could be letting you know they are in pain or uncomfortable.

Why does my Golden only moan and groan at night?

If your dog is groaning at night time it could simply be because they are getting ready to go to bed, and they are tired. These noises can be similar to yawns or shows of exhaustion. Grunts at night can also be because they are dreaming or having a nightmare, dogs can dream just as people can, and if you see that your dog is fast asleep but is kicking and grunting, they are likely just dreaming.

Why does my Golden groan when I pet them?

Goldens love attention and love to be pet and given belly rubs by their owners. If you are petting your golden retriever and they start to moan or groan, it is because they are letting you know they are enjoying this and they want to tell you to keep the scratches coming.

Why does my Golden Retriever grunt when stretching?

When a golden retriever is tired is may grunt too while stretching. When accompanied by yawning, this may be your dog’s normal getting ready for bed or waking up routine. When stretching to get ready for bed, they are letting you know they are excited to relax. When they are grunting and stretching after waking up it’s either to tell you they are still tired or they feel refreshed and ready to play.

There are several reasons for your golden retriever to be groaning, if you can’t figure out the reason why, a vet appointment may be necessary

If you have found yourself asking, why is my Golden Retriever making those noises? Be sure to pay attention to the context of the situation to help you determine if they are being territorial, playful, anxious, or just sleepy. Body language is another key way to understand what your dog is trying to tell you, and if you believe they are uncomfortable or in pain, it is always best to take them into the vet to be sure they are staying happy and healthy.