You are here: Home / Archives for Thompson Road

Thompson Road is one of my favorite place to go for a walk.
Why? It’s a beautiful and serene walk. (If you missed our blog post about Thompson Road, click here.)

Typically, we hardly see anyone walking (except for horses and cows) and from time to time service farm vehicles will pass us by. Lately, many are walking this road and about 4 to 5 cars pass us by.  Why? a well-known celebrity owns a vacation home on this road. What’s great is that she keeps a very low profile when she’s in town.

Well, last Friday 1/4/13 as we stood on the side of the road, waited for the cars to pass us leaving her bed & breakfast compound (typically just workers) but unexpectedly one of the car passenger was Miss Oprah. She rolled down her window, waved and smiled at us. Just imagine my mom’s reaction.  ME just Golden Happy (my wish came true from this blog post).

Photo below was taken from my mom’s iPhone immediately after our encounter with Miss O.
The color instagram version of the photo was posted on my FB page last Thursday. 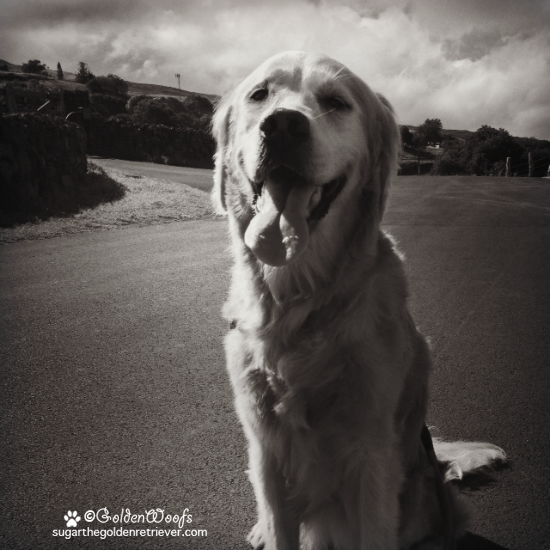 Many Golden Thanks to Miss O for a memorable walk at Thompson Road.

I’m Joining Black & White Sunday blog hop hosted by You Did What With Your Weiner, My Life in Blog Years, and Dachshund Nola. Happy FUN Sunday!

Meet my horse friend Blaze. I always see him when I walk the Thompson Road. 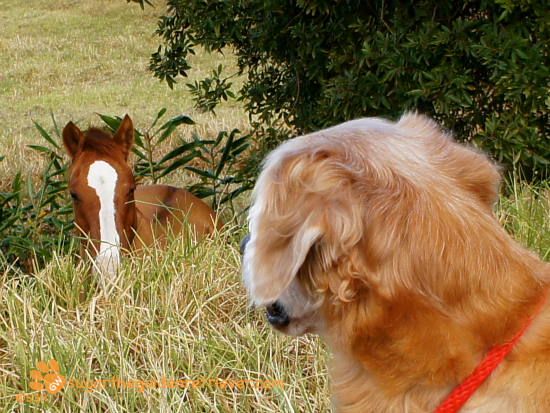 It seems that he always knows that I am coming. From the field he walks up close to the road.
He does not “neigh” but what we learned he “nickers.”

Blaze creates a vibrating sound with his mouth closed, coming from his vocal cords.  The tone is soft and calming as he approached me. What does it mean? It means “Hello, good to see you.”

For all my friends who owns/knows equine behavior, am I right? 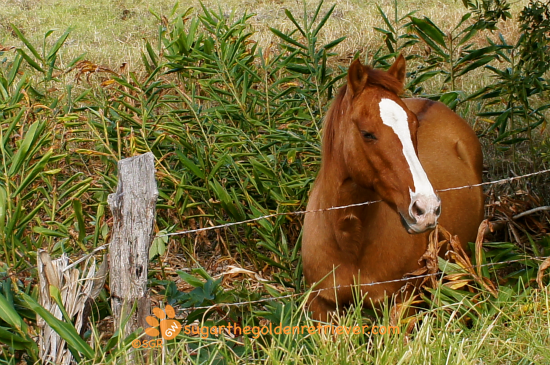 I don’t really know his name, I just named him Blaze because of the marking on his face.
It is called a blaze marking, a wide white stripe down the middle of  a horse face.

Don’t you think Blaze is a handsome horse?

Well, Blaze can be silly especially when he is with our friend Fly, the white bird.
I made up the name Fly as he enjoys flying everywhere.

Blaze rolls on then ground when he plays with Fly. Definitely, he is rolling for pleasure. At first we thought something happened to Blaze when he started to pace in circles and blew dirt in his nose. Then, he just lean to one side and started rolling.
Blaze was fun to watch as he rolled on the ground. 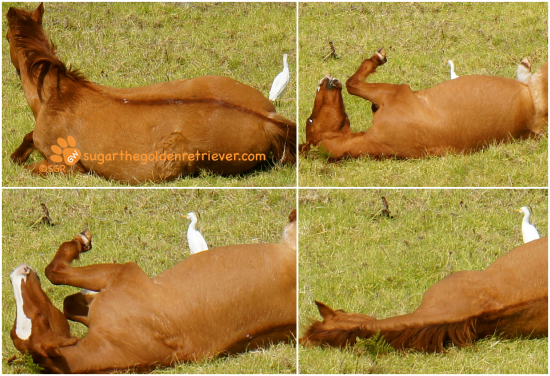 The way Blaze rolled down is a good indicator he is in good health.
He sure has a strong back to enable to roll from one side to the other without standing up first.

We learned that rolling is an essential play in a horse health as it stretches all the muscles in the spine, beck, barrel, flanks and buttocks. Blaze sure enjoyed his rolling play with Fly.

My walk at Thompson Road was a bit delayed.
Yes, it’s my fault as I would not leave and wanted to stay and watch Blaze and Fly.
I wish I could join them and  showed Blaze how I do my Golden Rolls.