You are here: Home / Archives for Hawaiian Dessert

Haupia (how-PEE-ah) is a traditional coconut-milk based Hawaiian dessert.
It is often served in luaus (lū‘au), a traditional Hawaiian party or feast.

The traditional Hawaiian recipe for haupia calls for heated coconut milk and mixed with ground pia (Arrowroot). However, there’s a lack of availability of arrowroot starch, thus cornstarch is used as a  substitute.

Mom is making some Haupia using this ready mix packaging.
I’m checking it … Mmmm I’ve read that coconut is good for dogs but mom insist that this dessert is only for human consumption due to added ingredients not good for me. 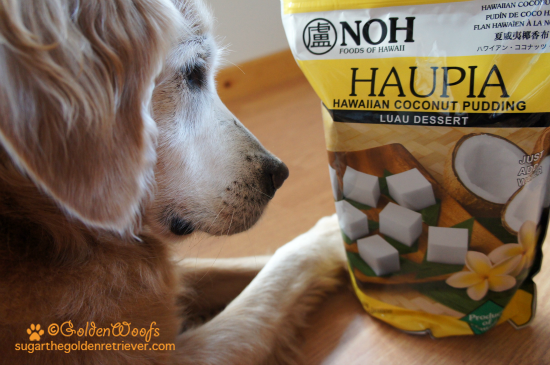 The typical modern recipe for haupia consist of fresh diluted coconut milk, sugar, salt, water then mixed with cornstarch and heated until thickened and smooth, like a gelatin. Then poured into a pan and chilled. It is traditionally cut and served into small blocks.

Mom said there’s a certain acquired taste of haupia and sometimes people need to get accustomed to it. So she was a bit fancy serving haupia.
She made some fried apple bananas and topped it with haupia and strawberry. 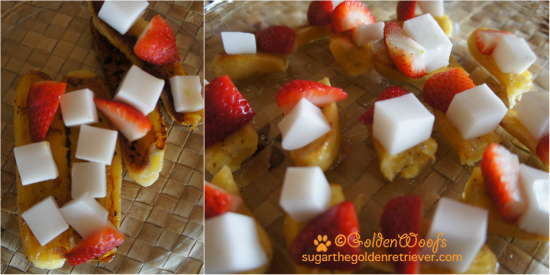