Golden Retrievers are known to be high-energy dogs and consider one of the more hyper dog breeds. The reason is due to their history as working dogs. Golden Retrievers love to get attention, play all day, go on adventures, and more, but this level of energy could get out of hand (especially for new owners) if it remains unchecked. 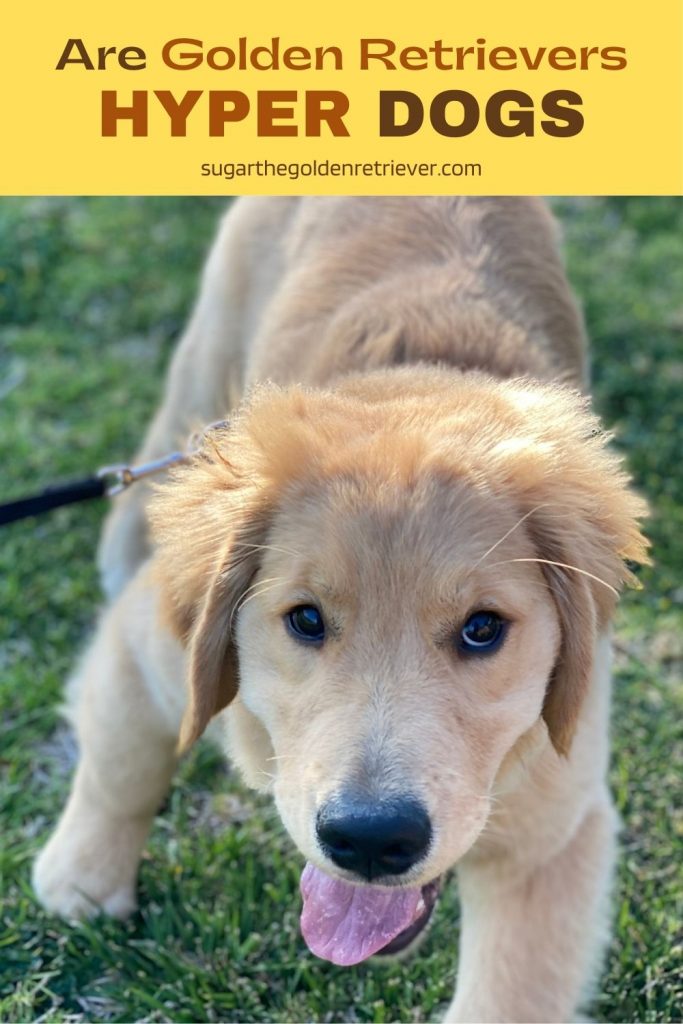 Two best Ways to Help Your Golden Retriever Calm Down

1) Your Golden Retriever’s energy is likely coming from a lack of activity. The longer your Golden goes without any playtime, the more they become anxious and let out their energy in other ways, like chewing on things, and jumping on unsuspecting family members.

So, it is advisable to keep your Golden outside playing, walking, or interacting with other dogs, for as long as possible to let them get it all out of their system.

2) The next helpful tip involves giving your Golden Retriever a lot of attention, but not just when they have annoyed you into it with their lovable clingy attitude.
The pent-up energy could also come from the inability to get their owners’ attention, and they may act out to get you to play with them.

To help subdue these behaviors, make sure to give your golden attention throughout the day, not just when they act out. This will help because instead of associating their bad behavior with your affection, they will instead not have to act out for you to pay attention to them.

Are All Golden Retrievers High Energy? 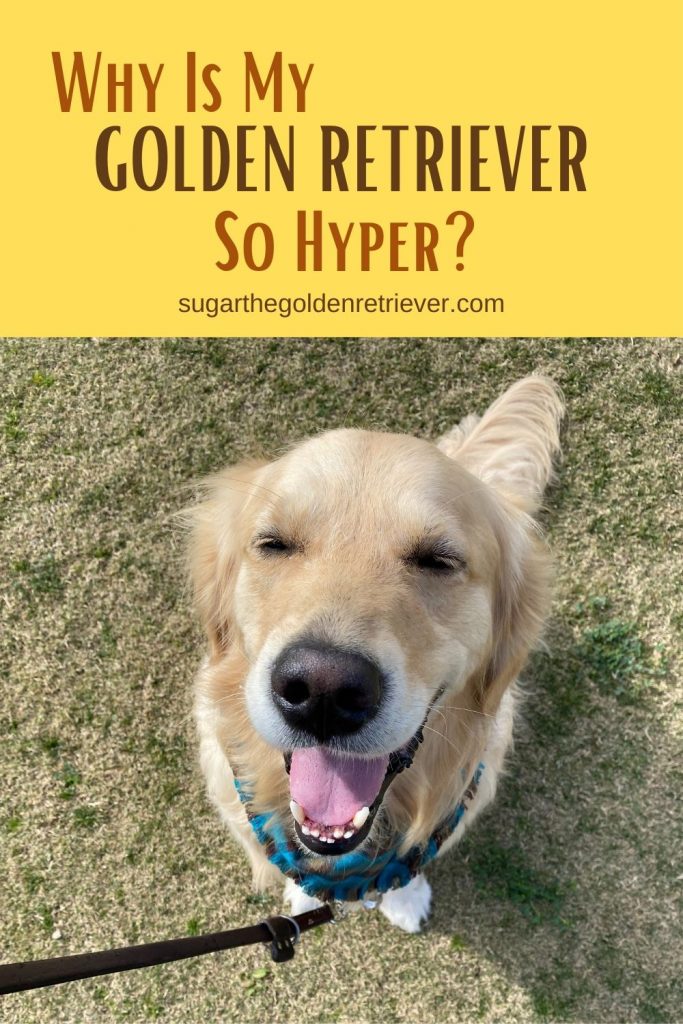 5 Reasons Why Is My Golden Retriever So Hyper?

This is a great question for new owners or even some seasoned Golden Retriever owners who may have had a Golden with a slightly different personality. A Golden Retriever dog breed has hard work and outdoor activities running through their veins, they have a free spirit and love to explore. They were bred to be hunting, and working dogs, so many generations have accumulated one fluffy, domesticated, ball of energy!

Age is a major contributing factor when it comes to why your Golden Retriever is so hyper. They are developing social constructs, getting used to their surroundings, and just like children, they love to play. Due to their historic disposition of outdoor activities, this dog loves to be outside in a big yard playing with children or other dogs. This lets them run off all of that energy while also building interactions with others.

They were bred as working dogs, meaning they have a genetic predisposition for more stamina and energy than some other dog breeds. They were primarily used as companions in mid-19th Scotland to hunt waterfowl, and track downed birds during hunting. This history means that the Golden Retriever was bred to keep up with birds being tracked in the water and on land over many miles. This sporting breed has always been high energy and ready to please.

3. Lack of Exercise can cause excessive hyperactivity in Goldens

Just how we humans can get cabin fever and want to go outside and do something to alleviate the mundanity, dogs are the same way. If your golden hasn’t been walked, played with, or even let outside for several hours, they will get restless and want to let out that pent-up energy. The best way to combat this is to get them some exercise, at least 30 minutes a day is usually sufficient for this breed.

As I mentioned previously, your dog may be acting out because they want to get your attention. Goldens are notoriously cuddly and somewhat clingy companions (especially if you have a male Golden Retriever), and they want all of the affection you can spare to them. If you have not played with or snuggled your Golden pup lately, they might be feeling a little neglected, which can lead them to act out in order to get you to fixate on them. If this sounds like the case for you, then the fix for this is to dedicate a time frame at least once or twice a day to giving your dog the attention they have been craving and playing one on one with them. This will let them know your bond is still strong while letting them get out some excess energy.

Similar to the issue of the lack of exercise, Golden Retrievers get bored and act out by showing their hyperactivity. The boredom can stem from many things like a lack of attention, exercise, or not having enough stimulating activities or training. To keep your dog from feeling bored, it is best to keep up their training and introduce new games and activities for them to try. Much like children, they need to be constantly stimulated, so switching up toys, or taking them to a dog park so they can have new interactions are great ways to rectify this. 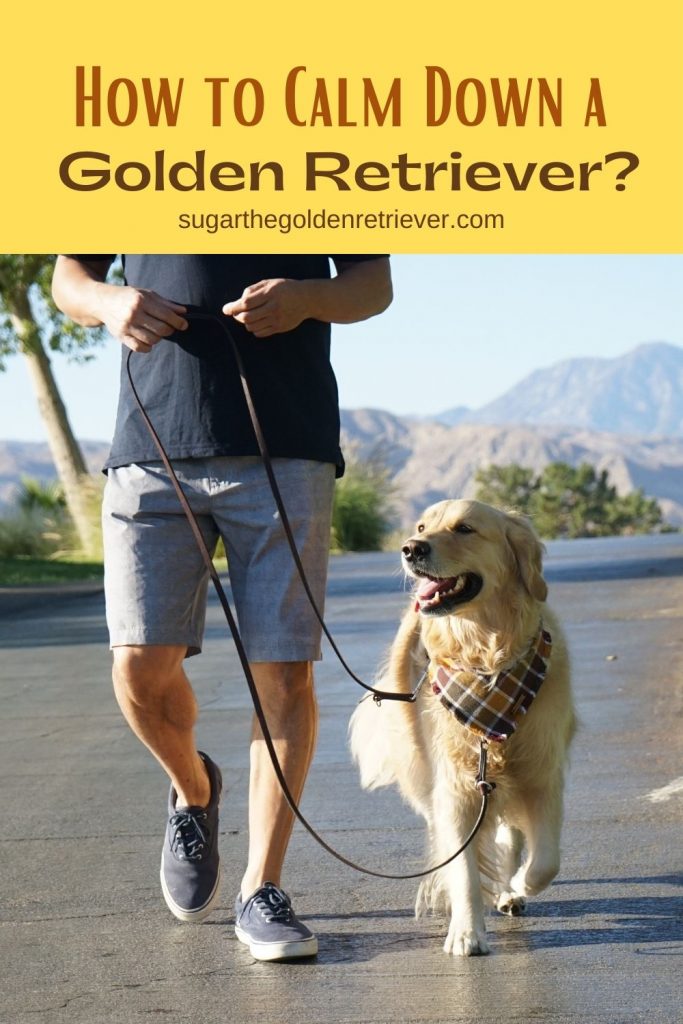 How to Calm Down A Golden Retriever?

If you are asking yourself how to keep your Golden Retriever calm, don’t worry; there are many options! These tips will give you the tools you need to keep you golden happy, healthy, and calm.

The best way to keep your dog calm is to let them get all of their energy out on a daily basis. At a minimum, your Golden Retriever needs at least 30 minutes of exercise a day. A Golden Retriever can play for hours on end, and they love it! This is why if a Golden Retriever don’t get a chance to walk and/or play daily, they could become restless, or even reckless. Something as simple as a daily walk or games of fetch could be extremely beneficial to your dog’s overall mental health and happiness.

Training your golden is very rewarding for both you and them, and as an added bonus it helps to keep their hyperactivity to a minimum. Golden Retriever dog breed is especially intelligent and is fairly easy to train, and sometimes they just need a little help with self-control, which can be taught. Obedience training will allow you to mentally stimulate your dog while also letting them learn the proper commands and times for things. For example, you can teach them to stop jumping on people or the furniture by teaching them “down”, or “sit.” Also, as you get more in tune with your Golden’s personality, you can teach them to calm down when they are in a hyper state and then reward them by going outside with them to play or giving them a treat. The more training you give your dog, the more well-behaved they will be and the stronger your bond will become.

Give Your Attention to Your Golden Regularly

The most important thing to think about when getting a Golden Retriever is to know they will require regular exercise and attention. A Golden Retriever dog breed is very playful and affectionate and needs to be loved constantly. Give your Golden Retriever frequent attention, make sure to cuddle, and play daily, so your Golden’s mental health remains in tip-top shape.

As Goldens can get bored very easily, and since they are known as strong sporting dogs, they have been known to destroy many chew toys. The best way to keep them interested and to keep you from buying new toys every few days is to invest in high-quality chew toys and treats. You could also invest in specialized chew toys and/or treat dispensers which are made to definitely keep your Golden’s attention and focus longer.

Do Golden Retrievers calm down after being neutered or spayed?

Many owners believe that spaying or neutering their dog will help to calm them down but that is usually not the case. Neutering and spaying can result in making the dog calmer for a short period of time while they are recovering and feeling fatigued.

Neutering has a slight chance of helping to correct behaviors if done while they are puppies, this is because they have not had time to learn problematic behaviors. In males, it is likely to help reduce aggression but does not guarantee an effect on hyperactivity, especially since this is a breed trait in Golden Retrievers and not just a hormonal factor.

The reduced energy behavior usually comes from the effects of the surgery itself being draining rather than changing their entire demeanor. It is more effective to train your Golden Retriever and reward for calmer behaviors, as this will become a lasting standard for your Golden, rather than a short-lived reprieve due to a procedure.

Will my Golden Stay Hyper Forever? When Do Golden Retrievers Calm Down?

Golden Retrievers are a hyper dog breed, however, like most dogs, they tend to calm down after their puppy phase, around 2 or 3 years old. Golden Retriever females of the breed tend to mature faster obedience-wise than males, so they are more likely to be calmer overall. How much they calm down is dependent on the specific dog itself, some may maintain their energy throughout their entire lives and others may taper off later in their life.