Did you know that approximately 60% of Golden Retrievers will die from cancer? That’s almost double the rate of cancer in all dogs. We think that is just too many. From UC Davis Veterinary Medicine, here’s Three Facts About Cancer in Golden Retrievers:

At 2 years old, My Golden Friend Sammy was rescued from GR rescue of Mid Florida. Last June at 8yrs old, Sammy suddenly collapsed from a walk and was diagnosed with Hemangiosarcoma. Sammy did not exhibit any cancer symptoms prior to his collapse as there usually is not with this type of cancer. A large mass and spleen was removed from Sammy. Hemangiosarcorma is a type of cancer that’s terminal. Sammy’s family have elected not to do Chemotherapy, as it would not benefit him that much.

Sammy’s family decided a holistic approach with a special diet full of high protein, green vegetables, healthy fruits low in sugar & herbal supplements. In addition, Sammy gets massages for his back legs to give him some comfort as well. 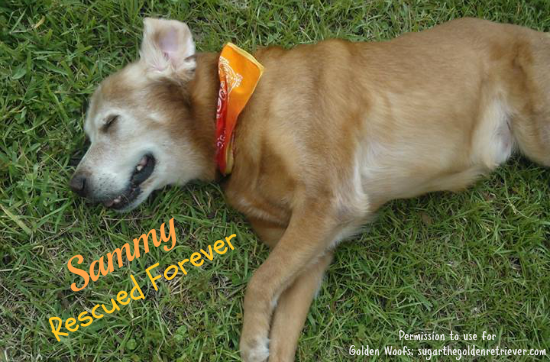 Most importantly, Sammy’s family focus is giving him a positive spirit everyday so he can keep fighting & remain strong. He gets regular exercise which is important for his overall well-being physically & mentally. They are also involved in a lot of local community groups/foundation creating awareness for Canine Cancer.

Morris Animal Foundation is a nonprofit organization that helps animals enjoy longer and healthier lives. They currently invited Golden Retrievers to partake in their Golden Retriever Lifetime Study. It will be the largest and longest dog study ever undertaken. 3,000 Golden Retrievers will be studied for at least 10 years, to gather data on genetics, environment, and diet factors that may lead to cancer. The goal is to learn how to better prevent and treat canine cancer, and make for healthier generations of Golden Retrievers.
If you have a Golden Retriever, check and enroll your dog in the study, or help spread the word to other dog parents and veterinarians. 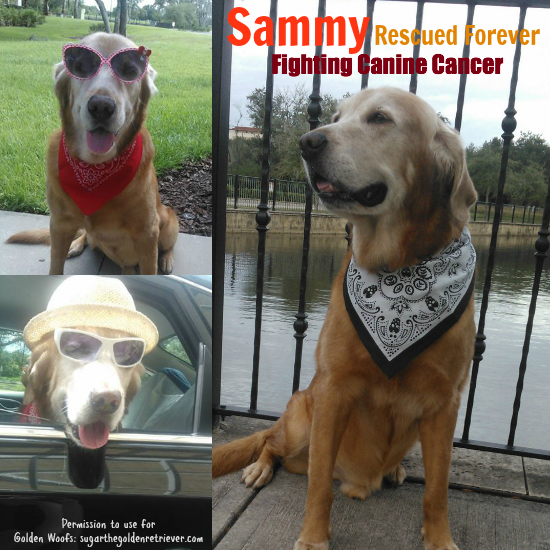 Lots of Golden Thanks to PetCareRx for the additional Golden Retriever Cancer data/information. We are inviting everyone to help PetCareRx raise $5,000 for the National Canine Cancer Foundation – head over to PetCareRx Facebook Page – for every “like,” they’ll donate 50 cents, “Put A Paws on Cancer.”