Why would a vet make a diagnosis based on dog’s age and breed? The question I continually ask myself since Sugar was misdiagnosed of having canine cancer.
It was 2013 Christmas evening when I brought Sugar to a 24/7 emergency care (Blue Pearl). It took only a short time to diagnose her bleeding mouth, “Sugar has a mass on the right side of her tongue.  At her age and breed, it is a cancerous mass (most likely).”
I am aware that cancer is common for Golden Retrievers. According to the statistics, approximately 60% of all Goldens will die from cancer and by gender, it’s 57% of females and 66% of males. Even Sugar’s regular vet had the same initial diagnosis but he said it in a very comforting way (and also providing statistical data). I was given several options on what to do and thankful that I choose to have the mass remove on Sugar’s tongue.
I can’t forget the day when Sugar’s vet delivered the good news on a surprising apologetic tone, “The mass is benign, Sugar is a lucky dog.” Sugar had another tongue surgery (removing smaller masses) and the result remained the same, benign masses. 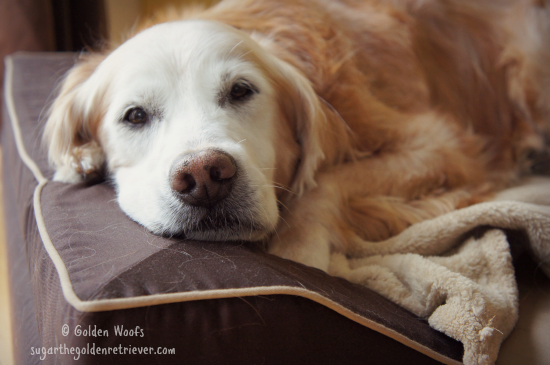 I am thankful for the good happy results but still question …
Should a diagnosis be based on a dog’s age and breed?

Golden Thanks for Morris Animal Foundation for giving HOPE.
Wishing them the very best on their Golden Retriever Lifetime Study.

Sugar got another mass that I am watching carefully.
Sugar is due to see the vet/surgeon in 8 weeks.
Here are the links in regards to Sugar’s prognosis and surgeries …
Prognosis a Pet Parent Does Not Want To Hear
Many Thanks (after Sugar’s 1st surgery)
Power of Positive Thinking
Sleep, Rest, Recovery (Sugar’s 2nd surgery)